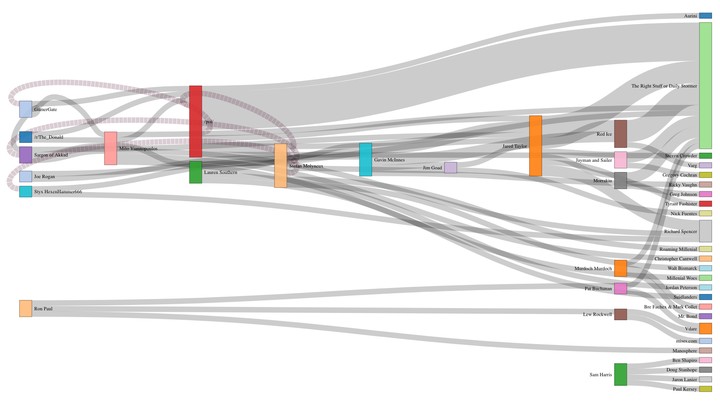 Recently, I was given the chance to explore an online forum where subscribers to a neo-nazi website were sharing the media sources, groups, movements, and thinkers that were responsible for bringing them there. Better yet, participants in this forum were sharing their journeys chronoligically, mapping out for anyone that might be interested, the sources they consumed as their beliefs became more extreme. There is more information on these data here.

Now, these data are by no means representative of broader pathways to far-right beliefs. There are only 44 testimonies shared here and there are obvious selection issues given that this is only one website, these are only the posters on that website, and the website itself is a very specific brand of far-right beliefs (i.e. Nazism). However, there are notable consistencies between accounts in these data and accounts themselves were sincere and often detailed.

Below are interactive Sankey Networks that these accounts of radicalization render. You can scroll over pathways or nodes to highlight exactly what nodes are connected in these testimonies.

The first network is using the full data and the second is using only the sources that were mentioned more than once. All testimonies in the first network end with arriving at one of two neo-nazi sites: The Daily Stormer or The Right Stuff. I grouped these together because 1) all testimonies ended with one of these and 2) it is generally agreed that these sites, though not always on the same page, represent some termination point of an online radicalization process. In the second graph, since I eliminated all sources that were mentioned only once, this also eliminated sources that were connected to The Daily Stormer or The Right Stuff. Therefore, we see paths that don't end this way, although all connections represent reported paths at some point in this process. Most interesting about this graph is that three major pathways emerge: an “alt-light” to “alt-right” pathway (e.g. Joe Rogan -> Gavin McInnese), a Libertarian pathway (e.g. Ron Paul -> Pat Buchanan), and an atheist/skeptic pathway (e.g. Sam Harris -> Ben Shapiro).

In light of this news, it just so happens that I have been playing with some data on pathways of far-right radicalization the past couple days. So what does deplatforming Gavin McInnes mean in terms of peoples' pathways to the alt-right? https://t.co/ZpvXjbhRSn